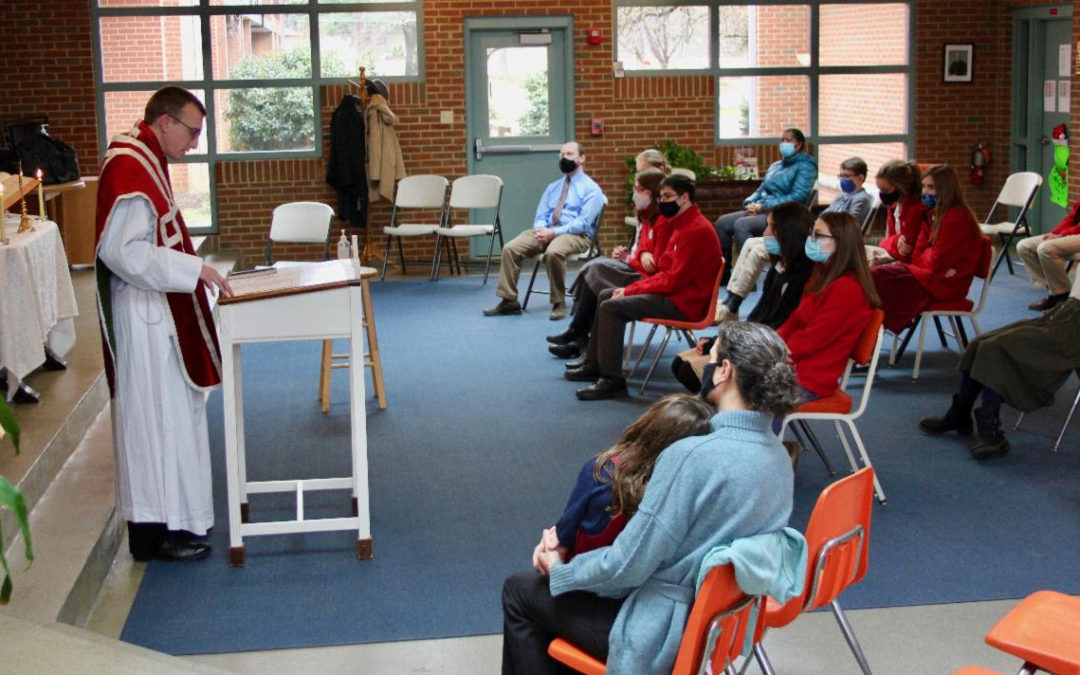 Tell among the nations his glory,
And his wonders among all the peoples,
For the Lord is great and highly to be praised.

The Mass of Tuesday, January 26th was a very memorable one for the Cardinal Newman Academy community as it was the first time we were able to celebrate the Holy Sacrifice of the Mass at our Bon Air campus. It was a beautiful and momentous occasion. The above quote from the Psalms (96) was the Entrance Antiphon for the Mass of that day and it especially struck me for several reasons.

“The Lord is great.” The Lord in His greatness has gifted us with Himself through the mystery of transubstantiation. The students at Cardinal Newman Academy attend Mass and have access to the Sacrament of Reconciliation once a week and, for one of those weeks, we are blessed to attend Mass within our own walls and praise Him in the building in which we gather every day for intellectual and spiritual growth. We are very grateful to the Diocese of Richmond for granting us permission to have Mass on-site. Cardinal Newman Academy is proud of its good relationship with the Diocese and we await with anticipation our coming recognition as an independent Catholic school. 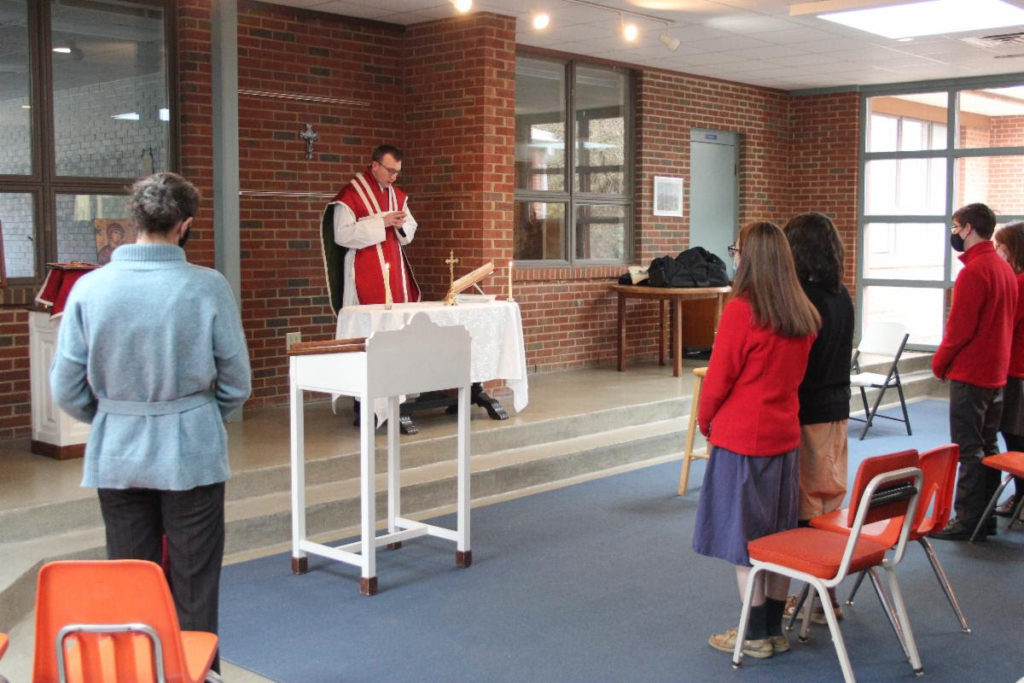 “Tell among the Nations his glory.” A school can be a wonderful way to tell the wonders of God to all the peoples. In many ways, I look upon my role as a teacher as a way to fulfill my part in the great commission of Jesus to go and make disciples of the nations (Matt. 28). This is the case in two ways. As a teacher, I show the truth about Jesus and His Church to my students, who, in their turn, spread the Good News to others. In another way, a school can be a wonderful witness to the world of the truth and the joy, love, and peace that can only be had through faith in Christ. 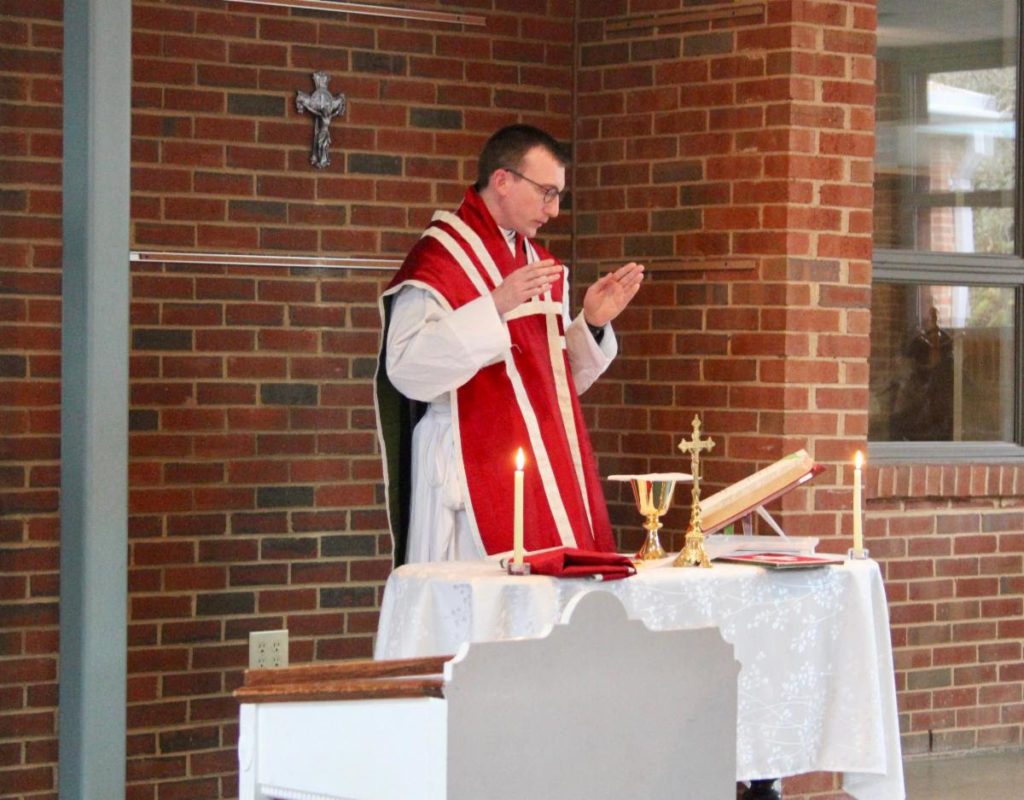 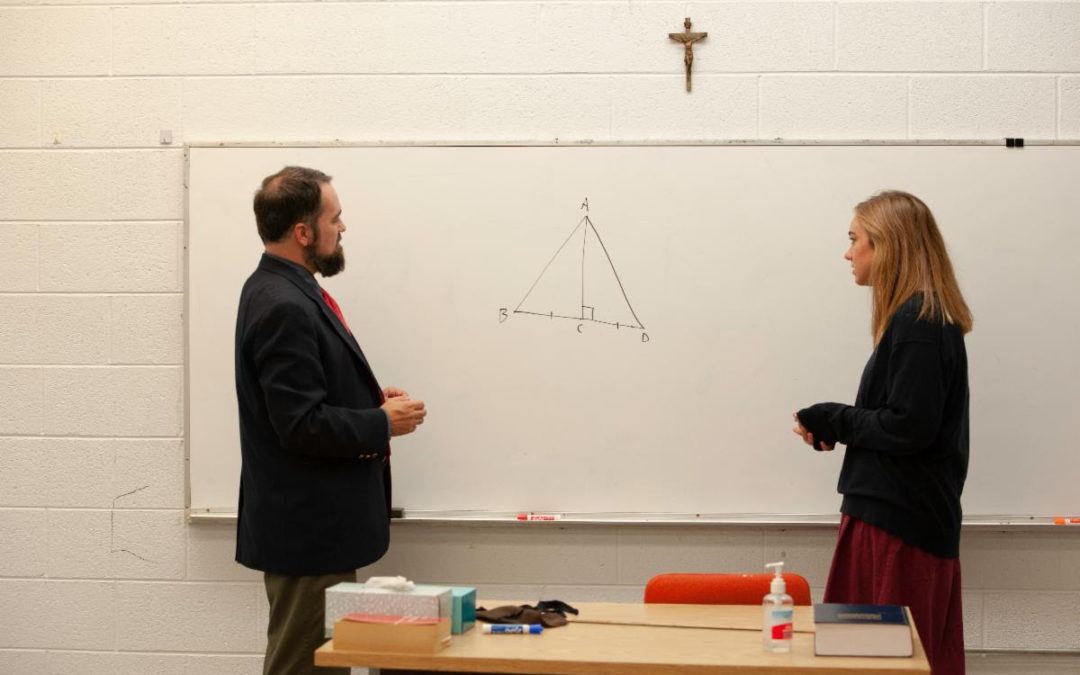 What is an education for?

I would like to pose what is perhaps a strange question – strange on account of its being largely taken for granted and yet, at the same time, somewhat difficult to answer.

What is education for? Why do you send your children to school? Why do we have them learn the things they learn? To what end? Is it simply to get a job? While that is certainly part of the picture I don’t think that is the ultimate reason. If somehow you knew for a certainty that your child would never have to work for a living, I still think you would have your child in school. Why? 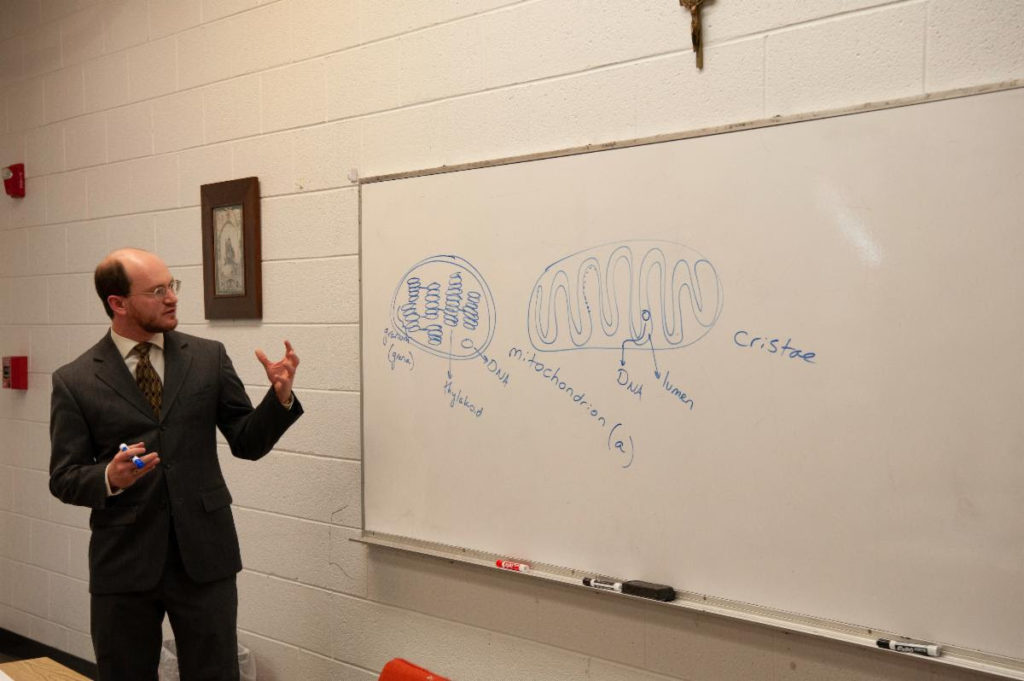 The answer is that we believe there exists a certain body of knowledge and information that 1) is either just good to know for its own sake or 2) forms the mind so that we may use it properly, much as we train our bodies for sports. 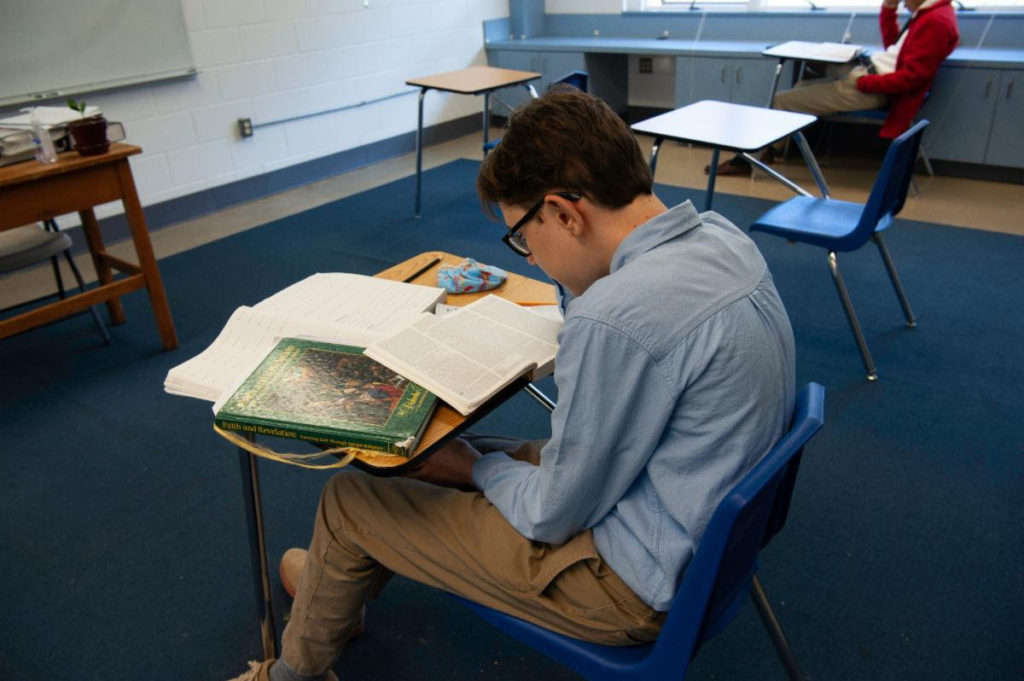 At Cardinal Newman Academy we keep in mind this goal of humanizing our students – of giving them the knowledge and tools they will need to succeed not only at college, but at life as well. I want my students to know good and true things, and I also want them to be good people in the fullest sense of that word. I want them to be responsible citizens of good character. 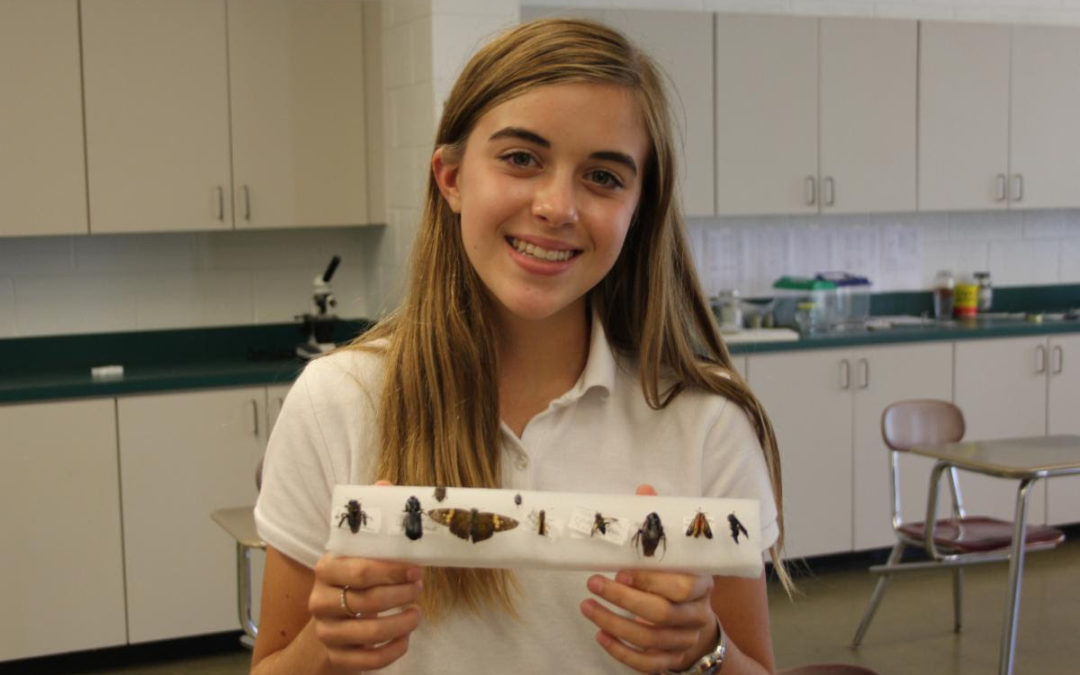 During the first semester at Cardinal Newman Academy, each freshman put together an insect collection. I asked Mr Tito, our science teacher, why the students do this. Here is his answer:

“Consider the following: In the U.S., there are more than 25,000 species of beetles alone, in about 130 families. Each family differs considerably in its way of life but often only subtly in its appearance. For instance, certain beetles are ferocious predators, pouncing on prey with long-legged leaps, while others gorge on harmless sap or pollen. There are beetles that hunt from ambush like leopards and others that pursue prey in packs like wolves. The ladybird beetles are famous for eating garden aphids; the glow-worm beetles specialize in toxic millipedes. This is just a fraction of the diversity of beetles, themselves just one among a host of insect groups. 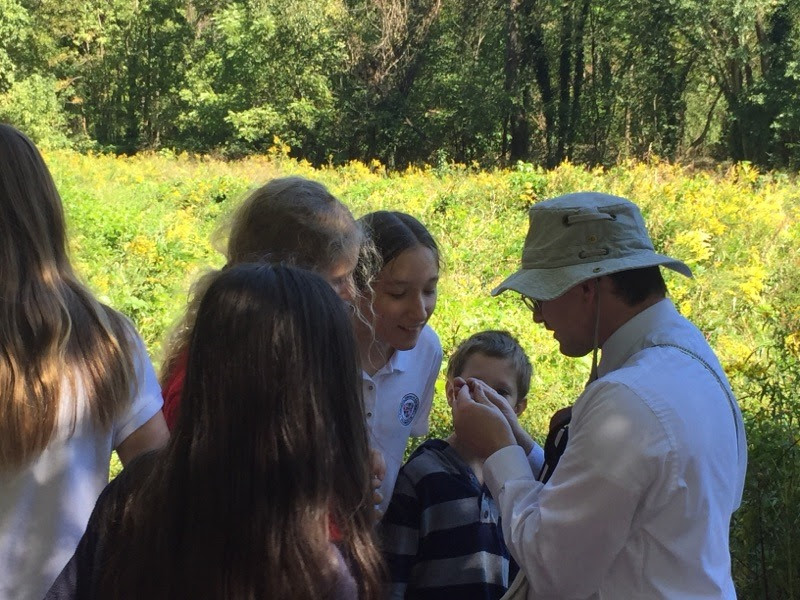 “How do we make sense of this? How do we learn about beetles? For the beginner the best way will be to focus on collecting and identifying whichever insects he happens to encounter. Once the insect is identified, the whole storehouse of knowledge about that creature is laid open, and not as abstract facts but as engrossing details about the life of a specific, relatable, individual creature. 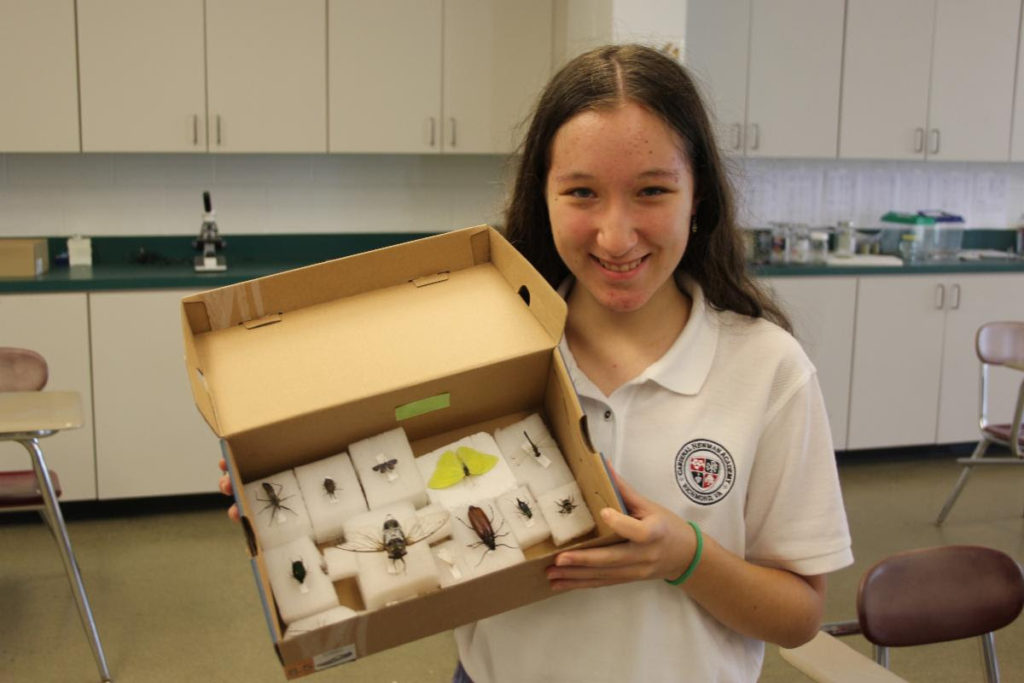 A Freshman student shows off her impressive insect collection.

“Collecting insects is important because only the most unique insects can be identified to species level on sight. Field guides show just a fraction of the species; useful as they are, one never knows whether an insect isn’t a similar species not shown. Drawings and photos are a good tool, but insufficient for really learning the insects – even the most strikingly marked, supposedly distinctive insects are often mimicked by multiple unrelated insects from other families, and it is hard to get all of the details in a photo.

“Yellowjackets, for instance, are mimicked by certain longhorn beetles and many flower flies, all harmless and often quite common. The mimicry is good enough to have fooled some of our Cardinal Newman students – until they carefully examined a specimen. Ultimately, then, we are left with specimens as the most effective way to learn about insects in an engaging, hands-on, and accurate way.” 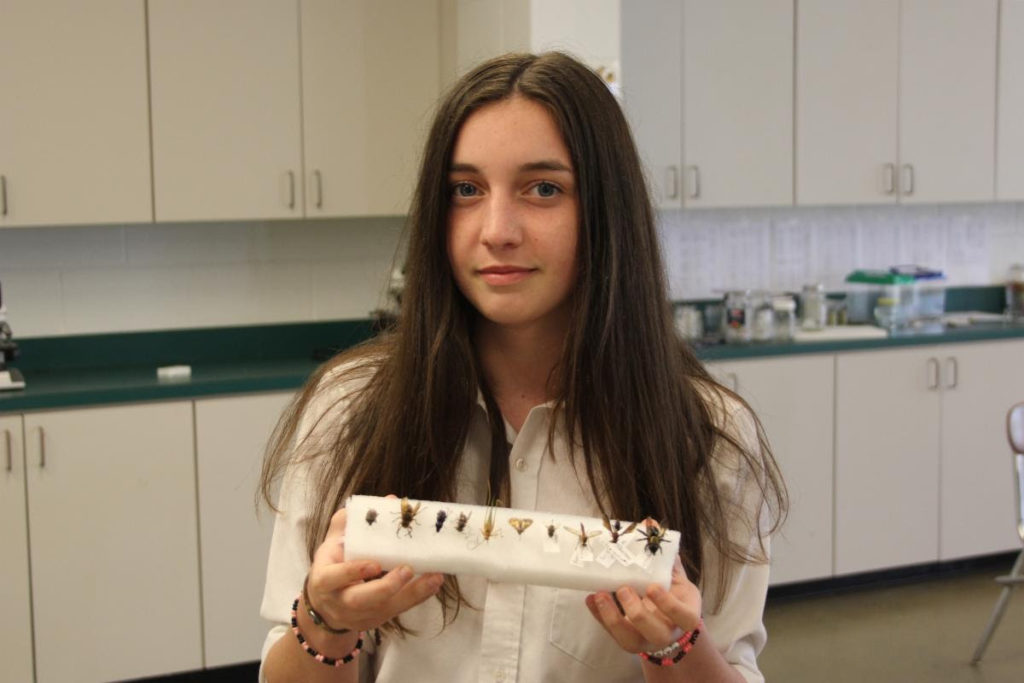 The great American teacher Mark Van Doren said a good teacher cultivates the memory, imagination, and observational powers of his students. It is not difficult to see how the collecting and classifying of insects directly nurtures all three of these important abilities that students will then use for difficult intellectual work. Further, catching and pinning insects directly taps into the students’ sense of wonder, that all-important part of the human person that questions what it encounters in an effort to grasp the truth. 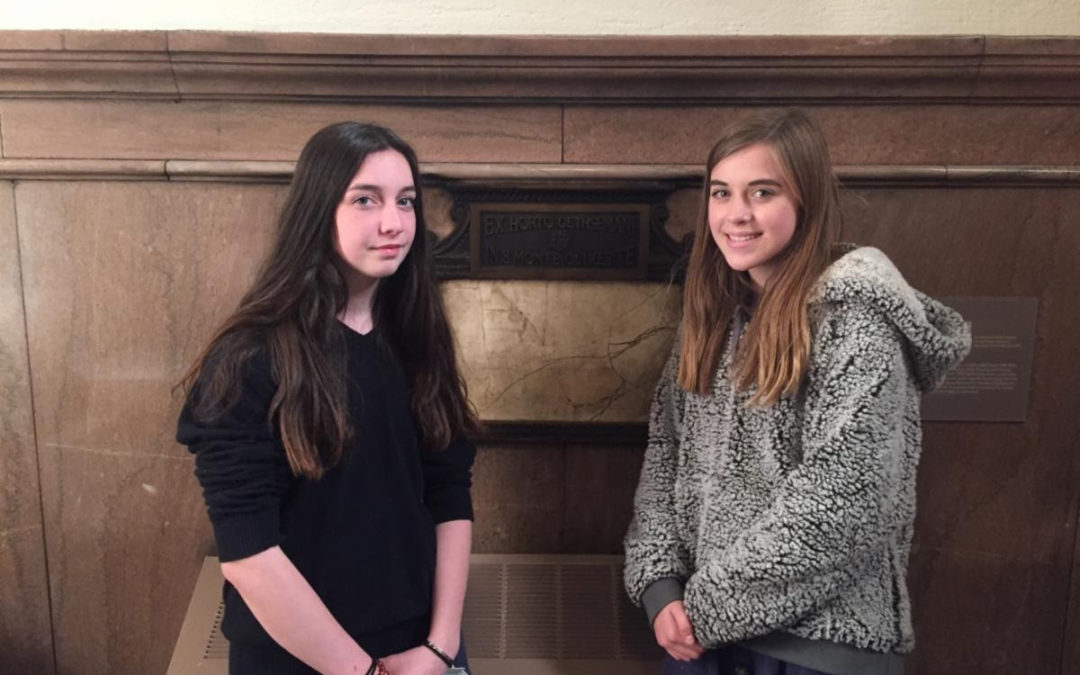 A pilgrimage is, of course, an expedition to some venerated place to which a vivid memory of sacred things experienced, or a long and wonderful history of human experience in divine matters, or a personal attraction affecting the soul impels one.
~Hilaire Belloc

In our current culture characterized by speed and consumption, the idea of a pilgrimage can be a foreign one. And yet it is just this experience of the foreign that gives the pilgrimage its unique power. Even if your destination is something you have seen every day of your life, the pilgrimage may allow you to see it in a new way, perhaps even to really see it for the first time.

The pilgrim must be open to the landscape and people he might encounter on the way. It is a higher form of travel: not undertaken simply to get from point A to point B in the most convenient manner possible. The journey itself takes on a significance, representing the life of the follower of Christ; a life that, God willing, ends in a holy place. 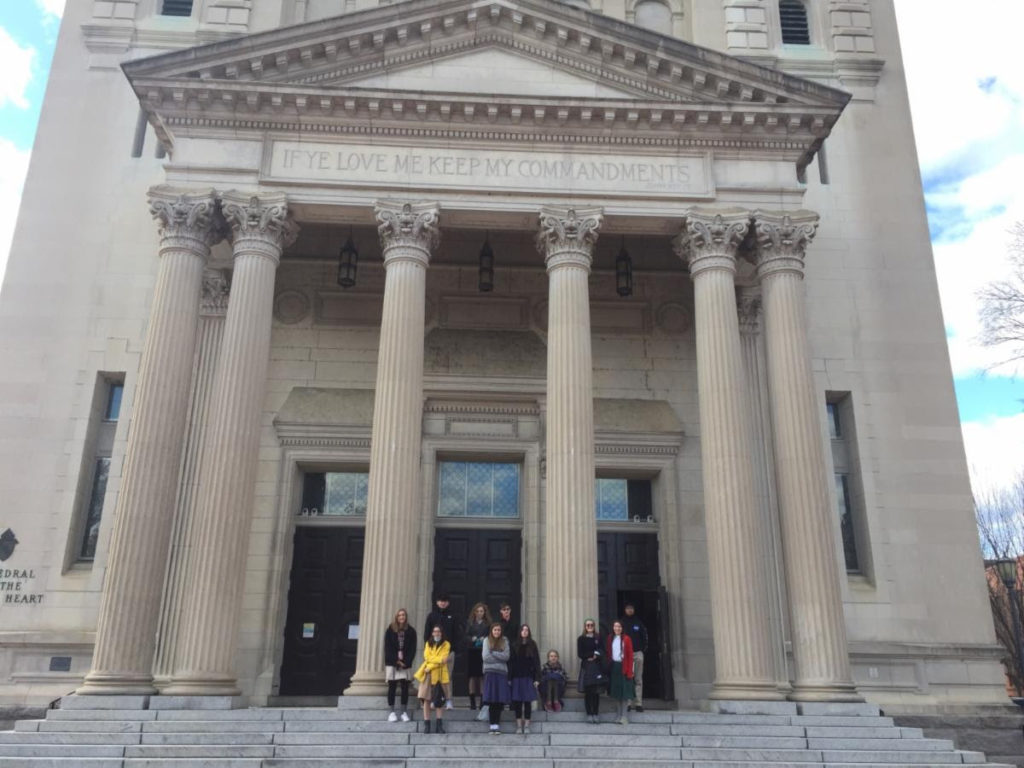 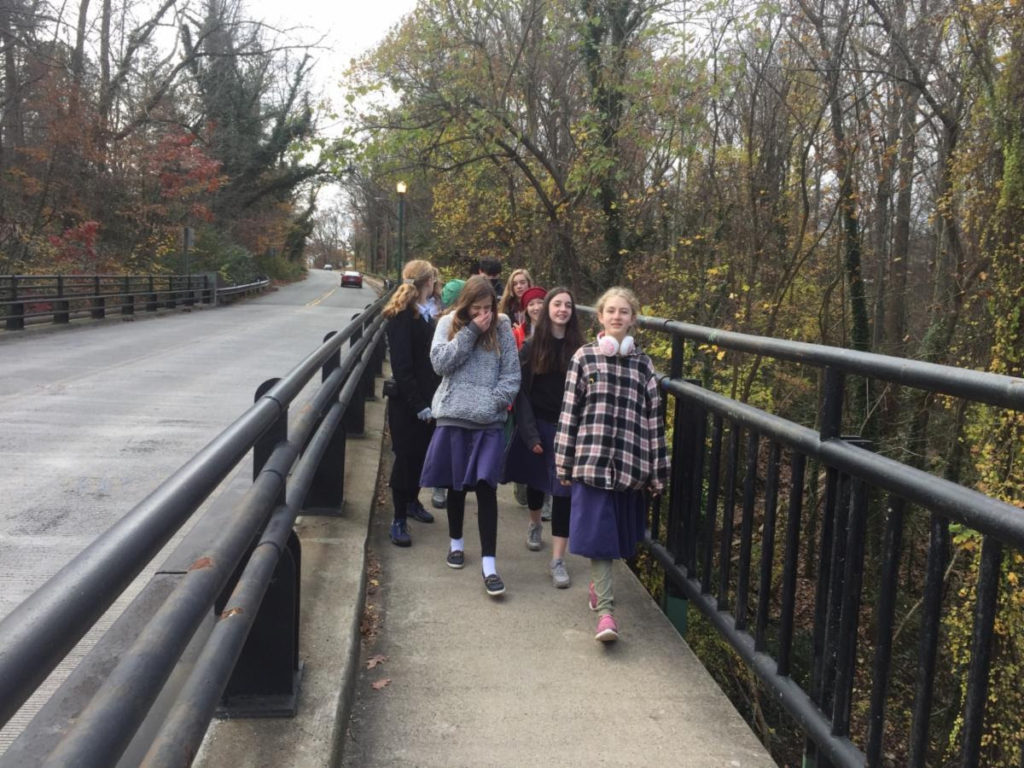 Our students had the opportunity to experience a pilgrimage first hand. To celebrate the bicentennial jubilee for the Diocese of Richmond, Pope Francis granted an indulgence to those who make a pilgrimage to the Cathedral of the Sacred Heart. At eight o’clock in the morning, therefore, on December 1st, the students and teachers of Cardinal Newman Academy set out from our campus to walk over eight miles to the seat of the Bishop of our Diocese. 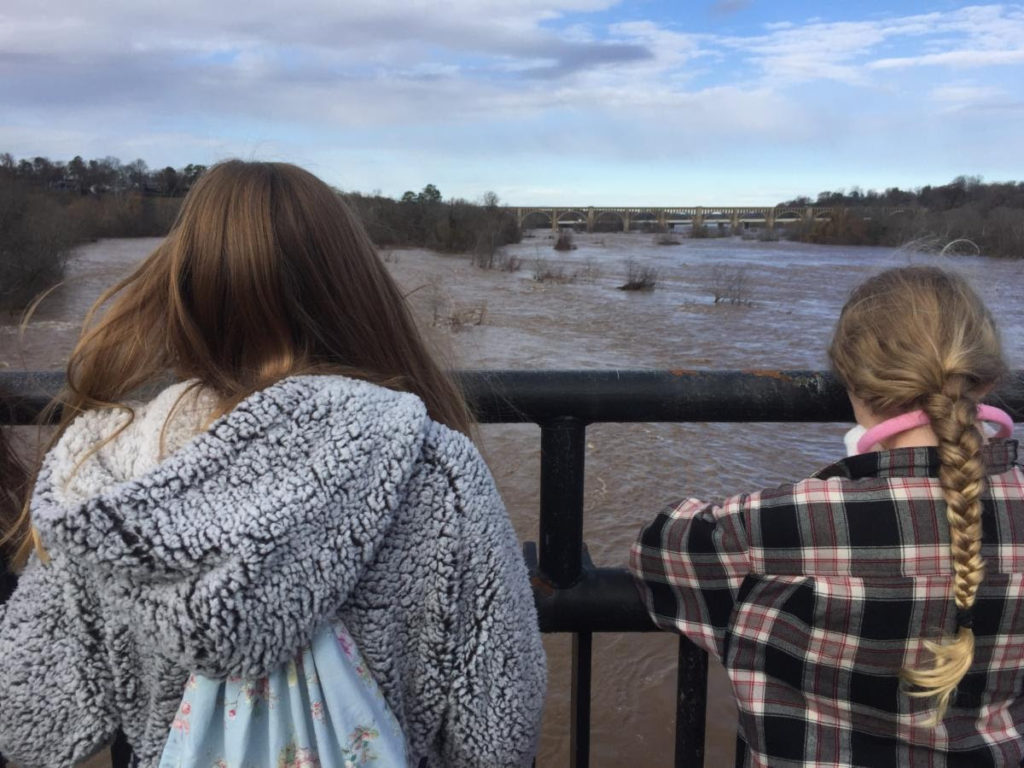 The students look out over the James River as they cross the Nickel Bridge.

Our route led us over the Nickel Bridge and into Maymont park where we stopped for a while to rest before setting out on the final stretch. The students walked with good spirit, but they were decidedly grateful when the Cathedral came into view.

We arrived in time to attend 12:05 Mass. After Mass, Father Anthony Marques, the rector, spoke to the students about the history, architecture, and art of the Cathedral. The students were especially interested to view the stone from the Garden of Gethsemane, which is embedded in the front interior wall.

Two students stand on either side of the rock from Gethsemane.
After exploring the wonders of the beautiful Cathedral, we headed back (driving this time!) to our school and I’m sure the students all slept very well that night. 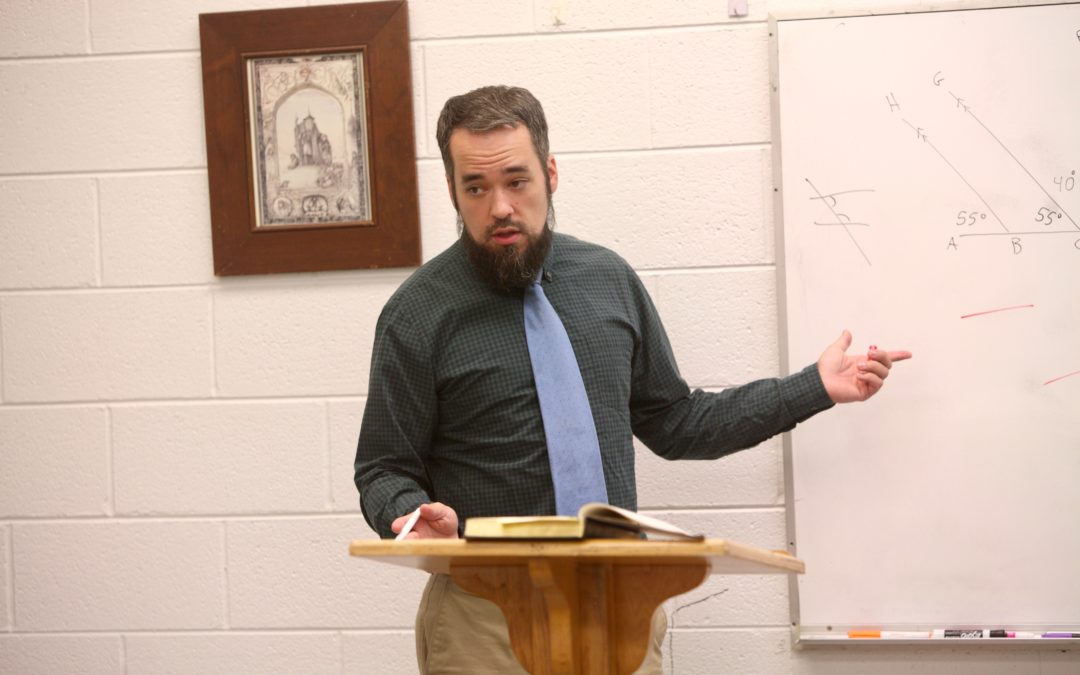 These challenging times have been the occasion for re-evaluating much in our lives, including the education of our children. As we look ahead to the 2020-21 academic year, Cardinal Newman Academy will open with in-person instruction, on time and in accordance with public health guidance . Our size, coupled with our spacious facilities, make compliance with health guidance feasible without jeopardizing learning.

We invite you to consider joining us. Why do we support a school or select one for our children? Most of us would agree that the pursuit of knowledge and virtue is paramount: knowledge that will guide them in their journey of life and virtue so they might be happy in that journey and live a life of purpose and fulfillment.

Cardinal Newman Academy continues in this mission, ensuring our students receive the education they need for the next step in their lives. To learn more, watch the video below for a virtual tour of our campus.

To learn more about our program and our plans for the 2020-21 academic year, please contact me.
In Christ, 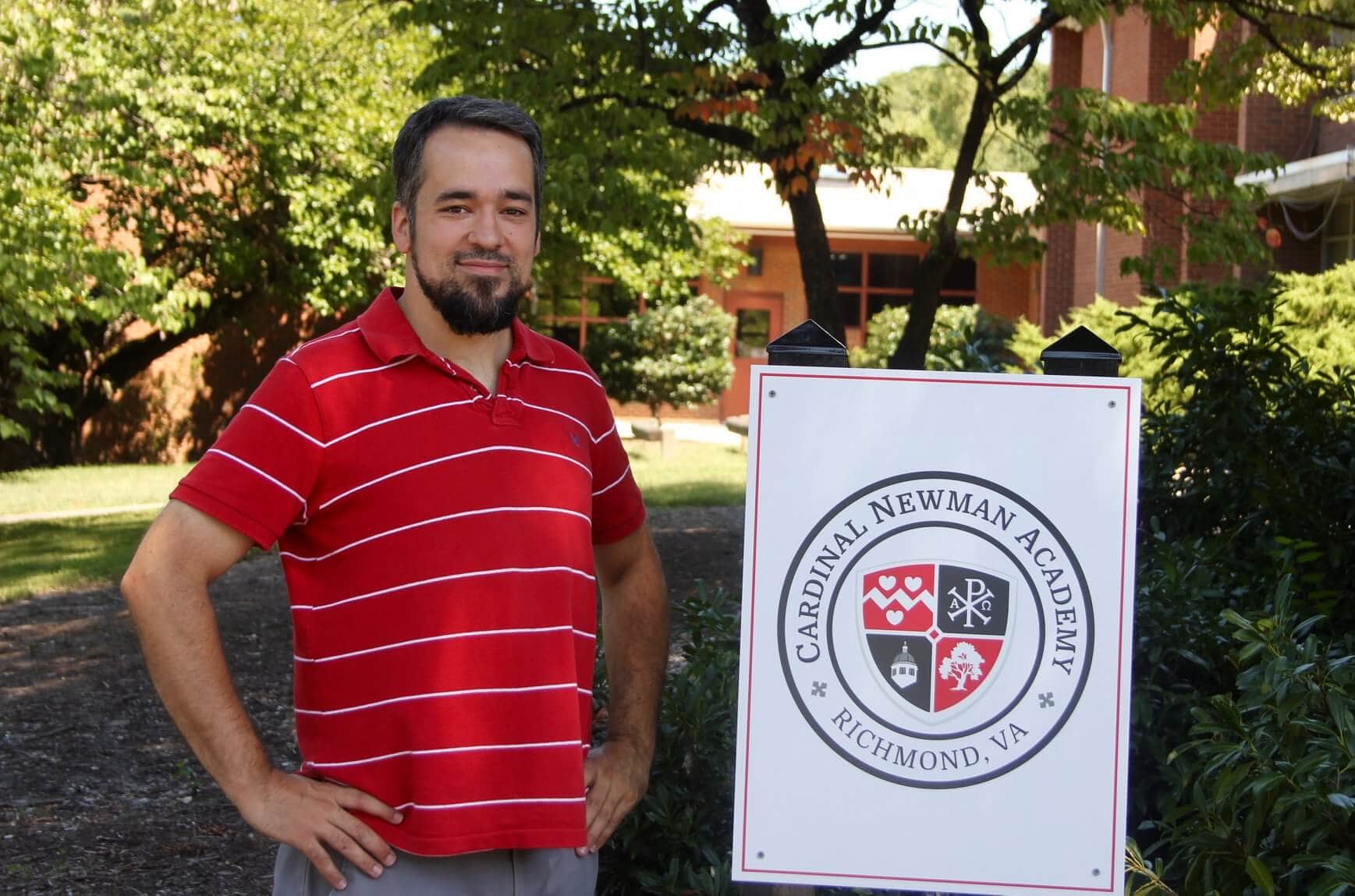 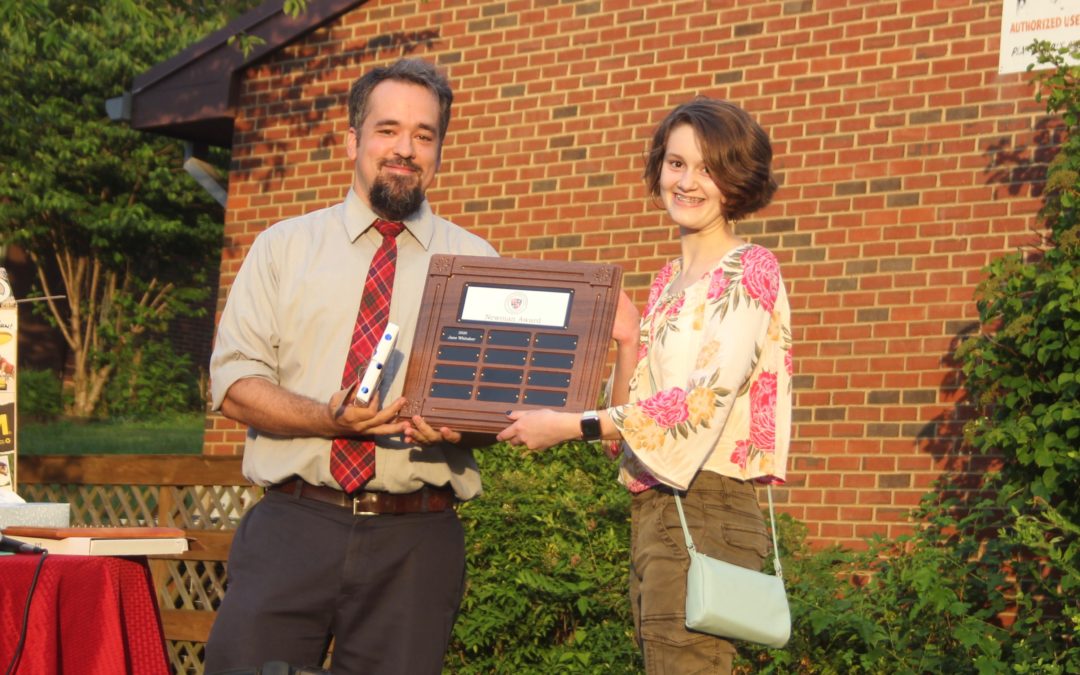 This week, Cardinal Newman Academy’s families and teachers gathered to officially conclude the 2019-2020 academic year with our annual Awards Ceremony. I was pleased to announce the Honor Roll for the first and second semesters, and address our community upon the completion of our third academic year and my first as Head of School. I spoke to our students about the importance of recognizing the truth, particularly in confusing and difficult times, and challenged them to focus on continue growing in the intellectual virtues and in their pursuit of the truth. 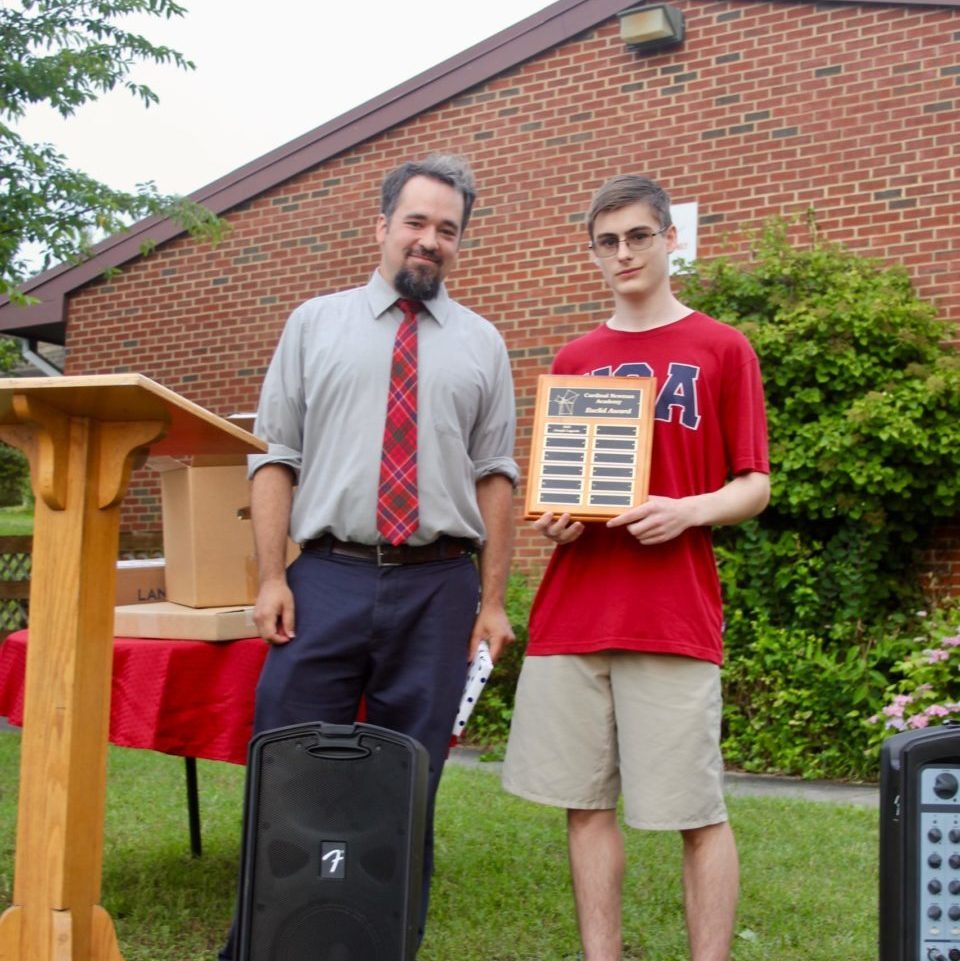 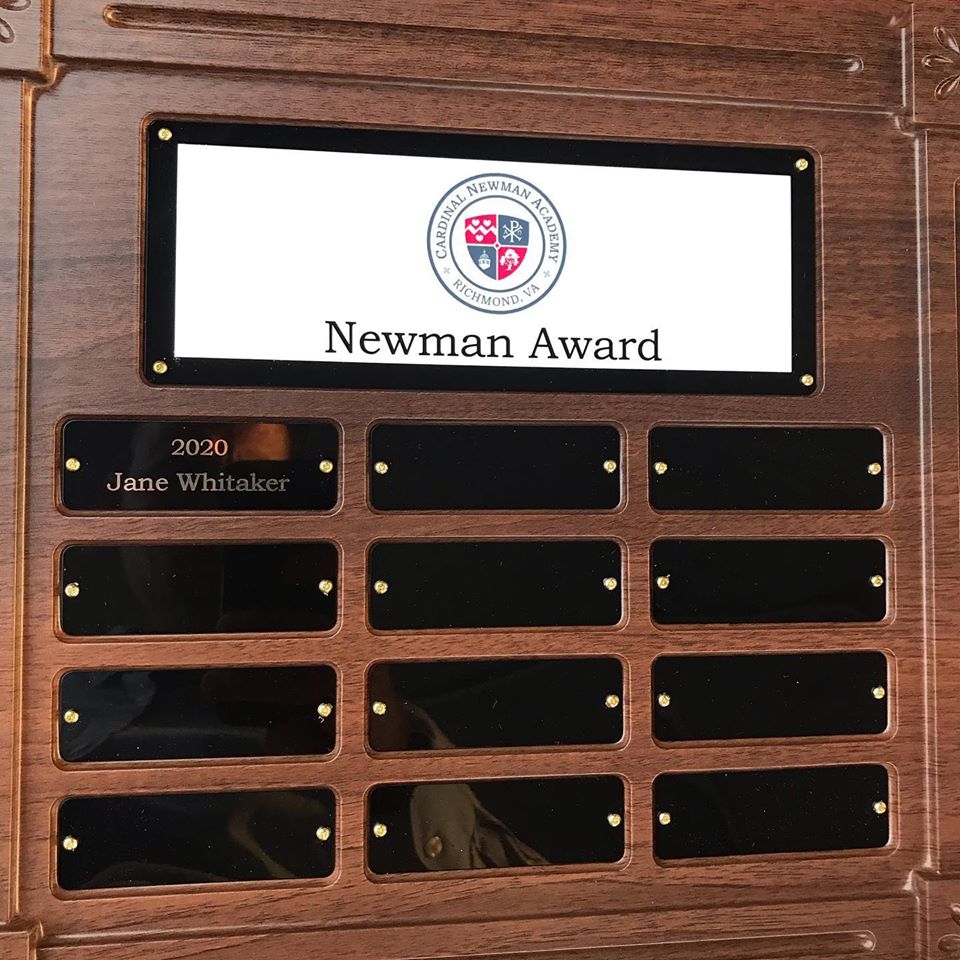 Cardinal Newman Academy is a young school still developing its traditions and awards. This year marked the inception of two major awards. The Newman Award is named for our patron and awarded to the student who best embodies the many ideals of the school. This award considers not only academic performance, but also a student’s social attitude and overall demeanor. This award tells the winning student: “Well done! You have done what the school has asked you to do and you have done it with a smile.” This year’s award went to rising-sophomore Jane Whitaker.

Monday also marked the first recipient of the Euclid Award, which will be annually awarded to the student who best displays excellence in the field of mathematics. This year’s award went to rising-senior Joseph Lagarde.

Besides the two major awards, students were also awarded prizes for their scores on the National Latin Exam.

Congratulations to the winners and to all of our students for their hard work during the 2019-2020 academic year! And a hearty thank you all of our faculty, families, and benefactors who made this year a success!